It is difficult to monitor how long opiates stay in a baby's system during pregnancy because it is not easy or ethical to do such studies on a human fetus. In addition, finding opiates in a newborn's system can't predict exactly when he was exposed. How long an opiate stays in a fetus or newborn is complicated and depends on several factors.

Opiates and the Mother

There are estimated timeframes for how long hydrocodone stays in the mother's urine, saliva, blood and hair follicles. There are various testing methods to detect hydrocodone as well. These tests include:

Can a Pregnant Woman Be Prescribed Opiates?

Even though there is evidence of negative effects of opioids on a developing fetus, some women may still be prescribed opiates by their doctor due to pain or injury. According to a 2016 study, up to 22% of pregnant women are prescribed opioids. However, prescribed opioids can be generally safe if:

Opiates and the Fetus

According to researchers from the University Hospital Zurich and others, the characteristics of opiates allow them to cross the placenta into the fetus within an hour of maternal use. How soon an opiate gets into fetal tissues and how long it stays in the fetus' system depends on complex factors.

What Influences Opiates in a Fetus?

In the absence of human fetal testing, many conclusions on the factors that influence how the human fetus handles opiates come from work with pregnant sheep and other lab studies. According to the textbook Maternal Substance Abuse and the Developing Nervous System, after a maternal opiate dose, the following factors can influence how long the drug stays in the fetus:

Effects of Opiates on Pregnancy and the Fetus 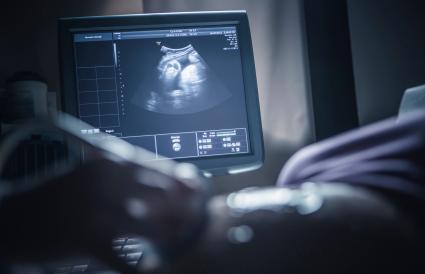 According to the authors of Maternal Substance Abuse and the Developing Nervous System, there are two main sources of opiate effects on the fetus:

According to Maternal Substance Abuse and the Developing Nervous System reference, at low doses and intermittent use, opiates excite the central nervous system but suppress it at higher and prolonged doses. Some of the fetal functions affected include:

As in the mother, prolonged exposure to opiates can lead to a physical drug dependence in the fetus. The fetus will also show signs of withdrawal if the mother misses a dose. Fetal opiate dependence is associated with increased risk of fetal death. Physical dependence and withdrawal are less likely with adequate methadone maintenance treatment of the mother during pregnancy.

According to the American College of Obstetricians and Gynecologists, if you take opiates during pregnancy, or abruptly stop them, you increase the risk of:

Pregnant women who are maintained on methadone substitution therapy throughout pregnancy are at less risk for preterm birth or low birth weight babies. There is inconclusive evidence of an increased risk of birth defects with maternal use of any opiate, but there might be a small risk in the first trimester.

Opiate Use and Birth Defects

According to a study led by the Centers for Disease Control, a link was found between birth defects and opioid use by the mother. These include:

Opiates and the Newborn 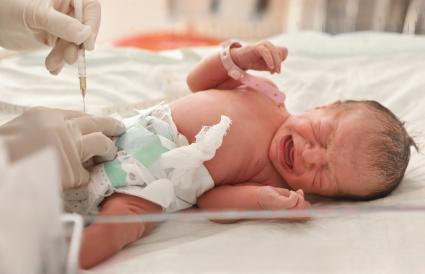 An opiate might still be detectable in a newborn's system at birth. According to the American Academy of Pediatrics (AAP), whether it's present and detectable at birth and how long it stays in his system after that depends on:

Some opiates, such as heroin, are quickly metabolized and may not be detectable in a newborn's urine or blood shortly after birth, but evidence of long-term exposure may be detectable in other specimens.

Detecting Opiates in the Newborn

According to the American Association of Pediatrics reference, in the newborn "there is no biological specimen that, when obtained randomly, identifies prenatal drug use with 100% accuracy." In other words, if a specimen is negative it doesn't rule out recent drug exposure.

Each of the three most common specimens used to detect opiates and other drugs in the newborn gives a general, not a specific, idea of how long the baby was exposed:

Detecting opiates in umbilical cord blood immediately at birth reflects recent maternal use and fetal exposure but cannot pinpoint when a drug was taken or how long it was in the fetal system.

Effects of Opiates on the Newborn

According to the AAP reference, effects of maternal opiate use during pregnancy can be seen in a newborn and may have lasting effects. Continuing problems for drug-addicted babies include hyperactivity, poor sleep patterns, short attention span, and poor memory in childhood.

The most significant problems for an opiate-exposed newborn are neonatal abstinence syndrome, an increased risk of newborn death or sudden infant death syndrome (SÌDS).

The neonatal abstinence syndrome (NAS) includes irritability, poor feeding, dysfunctional sleep, and high-pitched crying. It occurs when the opiate-dependent newborn is withdrawn from the mother's opiates at birth. The syndrome can be severe and a baby with NAS can spend several weeks in a hospital.

How soon NAS occurs and its severity depends on when the mother last used the opiate, how quickly the drug gets out of a baby's system and which opiate the mother used.

Statistics from the National Institute on Drug Addiction note that between 2000 and 2012 the incidence of neonatal abstinence syndrome increased five-fold, accompanying a similar increase in the maternal use of illicit and prescription opiates during pregnancy.

How Can a Pregnant Woman Get Clean From Opiates

A pregnant woman should never stop opiates cold turkey. This can cause severe problems for the pregnancy and the baby. There are ways a pregnant woman can safely detox and ultimately clean her system of opiates. This includes:

Give an Accurate History

Many factors affect how long opiates stay in a baby's system. Because use of opiates during pregnancy can affect your baby's health before and after birth, give your doctor or midwife an accurate history of your drug use so they can provide you and your baby with the right care and services.

27
Comments
© 2006-2020 LoveToKnow, Corp., except where otherwise noted. All Rights Reserved.
Resources, Advice & Tips for Covid-19
Read More
How Long Do Opiates Stay in a Baby's System?