The Rite of Baptism, the first of the seven sacraments, is steeped in the history, traditions, and rituals of the Catholic church. It is intended to cleanse away original sin and symbolizes a rebirth in Christ, recalling his baptism by John the Baptist. The ceremony initiates a child (or adult) into the Catholic faith and membership into the church, the holy body of the people of Christ.

The Ordinary Form Rite of Baptism

The Ordinary Form Rite of Baptism of 1970 is the sacrament performed by most Catholic churches around the world today. It is simpler and not bound to follow every detail of the more traditional Extraordinary Form Rite.

Today's modern churches can be flexible in the baptism rituals and accommodate a parishioner's wishes or needs. The baptism is often held at a Sunday mass in "communal celebration" with mother, father, child, family, friends, and other members of the church. The ceremony is divided into five main parts:

Each part of the Catholic baptism ceremony has special significance and meaning. 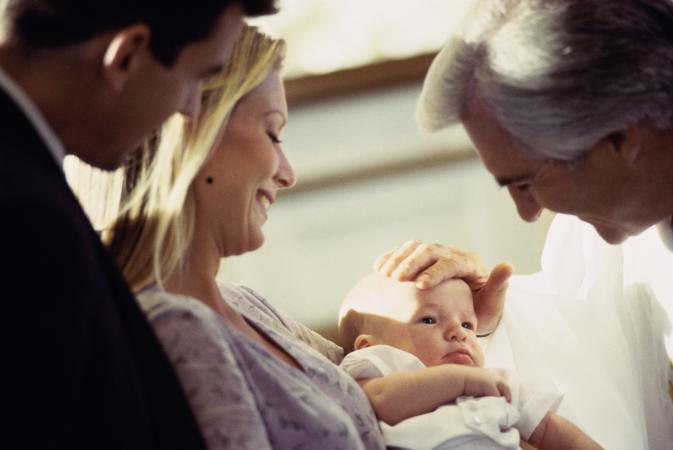 Reception of the Child

The baptismal sacrament for a child begins with the reception of the child into the church, during which the congregation may sing a psalm or hymn. The celebrant priest in his vestments, with his ministers, goes to the front or other part of the church where the parents, child and godparents are waiting. The priest:

Finally, the priest invites everyone to participate in the liturgy of the baptism. They then proceed to the place of the baptism (the Baptistery or the Sanctuary) while the congregation might sing a song. 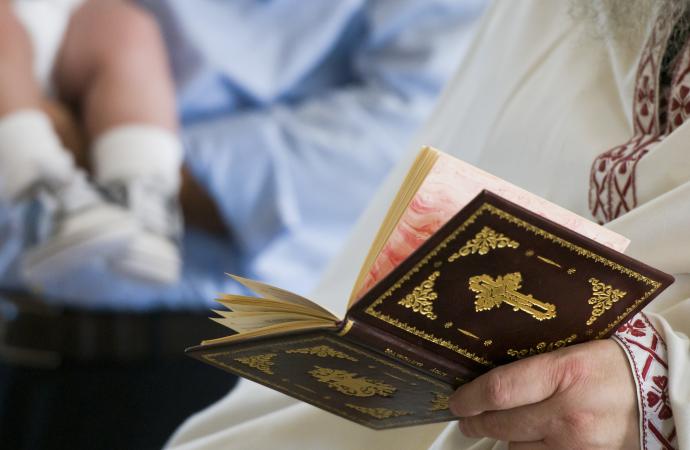 The Celebration of God's Word has five parts.

2. Intercessions (Prayer of the Faithful)

3. Invocation of the Saints

The celebrant invites the congregation to invoke the saints in succession to, "Pray for us":

Other saints may be invoked, especially patron saints of the child.

The priest asks God to free the child from original sin, for the Holy Spirit to dwell in him, and to strengthen and watch over the child. 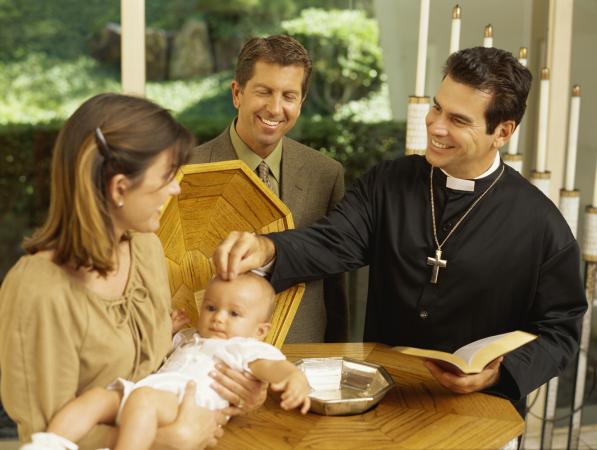 Celebration of the Sacrament

At the font, either parent may hold the child or, if by tradition there are godparents, one holds the child while the other places her right hand on the child 's shoulder during the baptism. The celebration of the sacrament has three parts, including the baptism.

1. Blessing and Invocation of God Over the Baptismal Water

The priest makes solemn prayers invoking God and recalling His plan of salvation and the power of water:

The priest next asks God's blessing on the water of the font, to make it holy so that the baptized may be cleansed of sin and made holy. The priest touches the water with his right hand and completes a prayer over it.

2. Renunciation of Sin and Profession of Faith 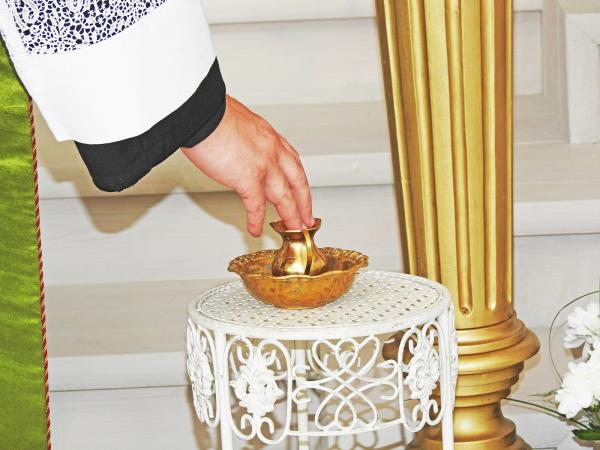 The explanatory rites which follow the baptism have three or four parts.

1. Anointing With the Chrism

Before anointing the child with the sacred chrism (consecrated oil), the priest welcomes the child into the holy people of Christ.

2. Clothing With the White Garment

The family provides the white garment that is now put on the child- which may have been passed down through generations. The white clothing is a baptism symbol representing a new creation. The child is now clothed in Christ and the white garment is an outward sign of the Christian mantle.

The lighting of the child's candle is a symbol of his enlightenment by Christ.

4.The Ephphatha or Prayers Over the Ears and Mouth

The Ephphatha (be opened) ritual is optional in modern baptisms. If done, the priest touches the child's ears and mouth with his thumb: ears to receive Christ's word, and mouth to proclaim his faith "to the praise and glory of God." Historically, the priest wets his thumb with spit to administer the Ephphatha. Many churches skip this ritual because of health concerns.

Conclusion of the Rite

The child's lit candle is carried in a procession to the altar, while a baptismal song may be sung.

Finally, a blessing is given to conclude the baptismal rite, at the end of which the congregation may sing a hymn of thanksgiving. The priest first says a prayer of blessing over the mother (who holds the child), then the father, then everyone else present. He concludes the Sacrament of the Baptism with "May almighty God, the Father, and the Son, and the Holy Spirit bless you." The people reply, "Amen". 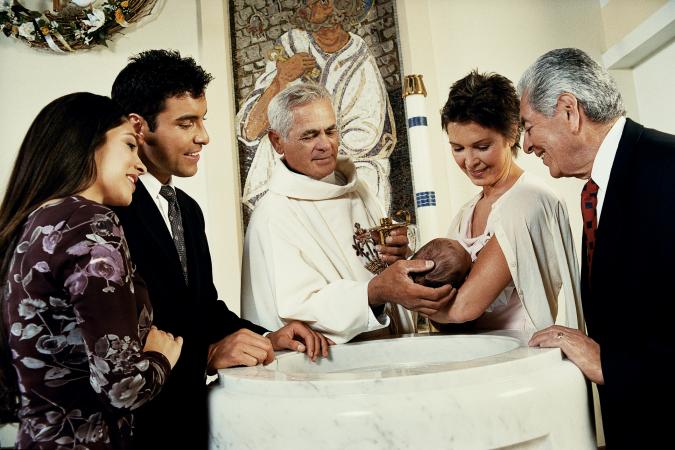 The Extraordinary Form Rite of Baptism

The Extraordinary Form Rite is more steeped in rituals, Catholic liturgy and Latin readings, and the order of the sacrament is different from the Ordinary. All the steps are required and a series of rituals take place that are left out of the Ordinary Form Rite:

Throughout the ceremony there are more prayers for the exorcism of Satan and sin than in the Ordinary Form of Baptism.

Adult Baptism in the Catholic Church

Catholic baptism is not limited to children. According to the United States Conference of Catholic Bishops (USCCB), adults who wish to join or convert to the Catholic faith complete the Rite of Christian Initiation of Adults (RCIA). Those who have not previously been baptised in another Christian faith will also go through a Catholic baptism ceremony.

The Rite of Baptism is infused with the rich rituals and symbolism of Catholic sacraments. Whether you prefer the traditional ceremonies of centuries past or you prefer simpler, more modern forms you will find beauty and grace in either version of the baptismal rites. Find a Catholic church and talk to a priest if you are considering a Catholic baptism for your child or yourself.

Comments
© 2006-2021 LoveToKnow, Corp., except where otherwise noted. All Rights Reserved.
Understanding the Rite of Catholic Baptism