Chinese baby names are rich in meaning and symbology, representing the parents' hopes and wishes for a successful and happy life for the child. Parents take into account considerations such as how well the name sounds, the imagery it brings about, how auspicious it is for the child, it's numerology, a well-balanced yin-yang, and even feng shui factors. Not surprisingly, there are many great baby names, and this is a selection of the most beautiful Chinese names.

Chinese names for girls tend to wish upon the child beauty and virtue. The meaning of each name is listed, and in parentheses, it also describes what images, sounds, or ideas the name is meant to invoke.

The following chart includes the names written in Chinese characters. 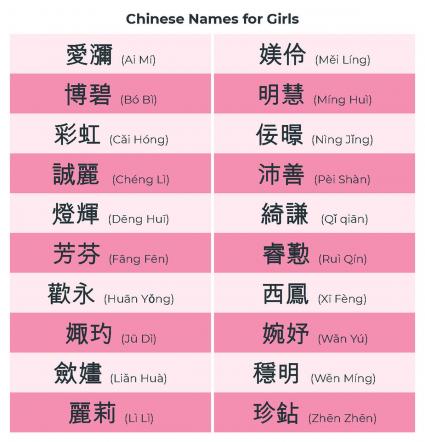 Chinese names for boys often represent the kind of future the parents wish for their sons.

For the Chinese characters of each name, please consult the following chart. 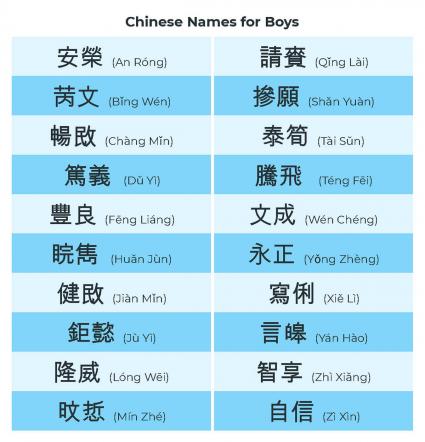 Chinese names are formed by one last name, one middle name, and one first name in that order. For example in the name Zhōu Jié Lún, the surname is Zhōu, the middle name is Jié, the first name is Lún. More often than not, the whole name is used to address the person or the last name plus an honorific, for example Zhōu xiān shēng - Mister Zhōu. People close to the person, such as family members and friends, may use the middle and first name Jié Lún. His parents and maybe his significant other may on occasion call him by his first name plus a final particle, i.e: Lún-ah, this is a sign of great closeness. 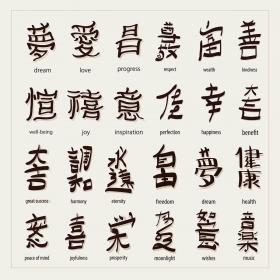 Without taking into account the family's surname, Chinese names are composed of two characters (syllables that represent ideas, actions, objects, etc). Any combination is possible as long as it has a nice sound flow (easy to pronounce), the two characters combined have a good meaning, and the characters are not too obscure or ancient. For multicultural families, it is also a nice idea to consider combining characters that sound like western names such as Lì lì which sounds like Lily, or Xie Li which sounds like Jerry.

Choosing the Right Combination of Characters

When choosing characters to form your baby's name, you may want to consider:

The most taboo thing to do is to name a child after an ancestor or an elder, living or dead. Since the name will be used without honorifics when addressing the child, it would be like disrespecting the elder whom you would address with honorifics. You also want to avoid using characters the mean disease, death, difficulty, or any other thing you don't wish upon the child, unless you are combining it with a negation character.

Traditional Chinese families create generational acrostic poems to be followed by several generations in one family. Each generation gets an appointed a character belonging to the poem. This character then becomes the middle name of an entire generation in that family. So, for instance, you might encounter families in which all siblings and cousins all share the same middle name. A good example would be these names for three siblings:

If you don't have a generational acrostic poem for your family but you want to implement this tradition, you can still choose a middle name for all your children and then elect their first name individually. 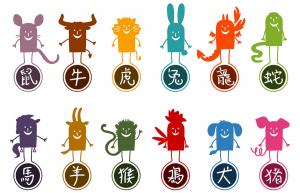 Chinese astrology is a rich and complex art. Master astrologists help determine all kind of important aspects of daily life, including auspicious dates to open a business, get married, break ground, get pregnant, decorate a home, determine marriage compatibility, and name a child (among many other elements of daily life). In naming a child using astrology, you would consider factors such as:

Considering these and other factors, the astrologer then helps choose a name that both compensates what the child might be lacking and equilibrates whatever he/she may have in excess. If you would like to name your child taking into account Chinese astrology, it is highly recommended you consult with an expert.

A Chinese Name Is Above All, Meaningful

Choosing a Chinese name for your baby may imply more than just choosing a name with a nice ring to it. It could also mean a visit to a Chinese astrologist and perhaps taking into account your family's tradition. However in the end, it is the meaning that matters. Choose a name that resonates with your heart and brings a smile to your face.