There are many types of diaper rash ointments available for babies. Some serve certain purposes better than others, but almost all are used for the prevention of diaper rash.

Technically there is a difference between an ointment and a cream, and this disparity of nomenclature divides the realm of diaper rash treatments into two distinct categories. Without delving into the chemical nature of both categories, for the most part, diaper creams will be represented by the thick or filmy white substances found in popular brands like Desitin and Burt's Bees. Diaper ointments employ a moist oily base to seal in moisture while maintaining a barrier from outside elements.

Most diaper creams employ a zinc oxide base in order to provide a solid barrier against external substances. In contrast, the majority of diaper ointments use a petroleum base that goes on smoothly and easily. Some parents find diaper rash creams that contain zinc oxide to be too sticky, and so an ointment can be the better alternative.

Either way, the most important aspect of either the diaper rash cream or ointment is its ability to provide a barrier against outside moisture and acidic substances such as your baby's bowel movements. Some creams and ointments contain medicated or healing ingredients to help repair irritated skin, whereas other creams merely focus on providing a thick reliable barrier. 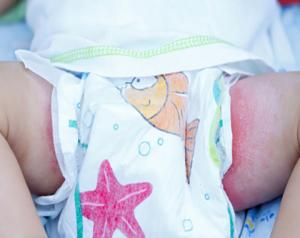 When your child experiences a severe diaper rash that has reached an infected stage, none of the above ointments may prove effective. There are prescription creams and ointments that your doctor may recommend, many of which will use antifungal ingredients, and these will often be used in conjunction with an over-the-counter cream.

It is important to remember that a small outstanding diaper rash can become a huge aggravated problem over time if proper diaper rash protocol is ignored. Cleansing your baby ritually and applying diaper rash ointments after every diaper change is essential for the prevention of staph-infected rashes and even septic conditions.

Your best bet for using a diaper ointment effectively is to apply it to clean dry skin. If your baby has suffered from diaper rashes in the past or appears to have a chronic problem with skin irritation, it is never a bad idea to wash your baby's bottom under the sink before applying the ointment. Again, the skin must be clean and completely dry; otherwise you will trap both moisture and irritating elements underneath the diaper ointment, sealing them close to your infant's skin. This defeats the purpose of using a diaper ointment.

Children who suffer from repeated diaper rashes, despite the application of diaper rash treatments, are often not being cleansed and dried properly before their diaper ointment is applied. Also, remember that diaper ointments possess ingredients that naturally repel water. So when you are cleansing your baby, you will need to use soap and a good scrubbing technique to remove any residual diaper creams or ointments. This can become more than tedious if your child has several bowel movements a day, but it is an excellent method for preventing severe diaper rash.