The topic of infant eye color often begins long before a baby is even born as parents speculate about who the baby will look like. The color of a newborn baby's eyes isn't necessarily what her final eye color will be.

The Color of Your Baby's Eyes and Genetics

While it's no surprise that genetics is the basis for infant eye color, determining a baby's eye color before he or she is born certainly isn't an exact science. What scientists do know is that eye color is dependent on how much of the pigment melanin is present in an eye's iris. Basically, there are two major ends of the eye color spectrum--blue and brown--and all other colors generally fall somewhere between these two colors.

People with lower amounts of melanin have lighter colored eyes, and people with higher amounts of melanin have darker colored eyes. Because melanin is also a skin pigment, it stands to reason that fair skinned people often have light colored blue and green eyes, while darker skinned people have brown eyes. So, how does this add up, however, when a baby's parents have blue eyes and brown eyes respectively?

Because a baby inherits two sets of every gene, called alleles, one from the father and one from the mother, determining what his or her eye color will be involves more than just speculation. Many people assume that because brown eyes are more dominant than blue eyes, a baby born to parents with both colors respectively will automatically have brown eyes. This may or may not be the case.

A Number of Genetic Factors Play a Role

For example, if a brown-eyed father actually carries a brown-eyed gene and a blue-eyed gene, the recessive gene (blue) could be passed on to the baby, particularly if there is a blue-eyed mother. However, if the father carried only brown-eyed genes and the mother is blue-eyed, the baby more than likely would be born as brown-eyed as well. Since only genetic testing would offer a conclusion as to what dominant and recessive genes are carried by the mother and the father, predicting a baby's definite eye color is nearly impossible. Also, many scientists subscribe to the theory that there are more than just two genes which influence a child's eye color. 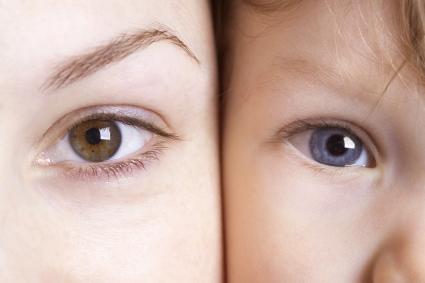 While eye trivia may not help you predict your child's eye color, it is fun to look at. Did you know the following trivia tidbits?

Brown is the most common eye color throughout the world. About 55 percent of the people in the world have brown eyes. 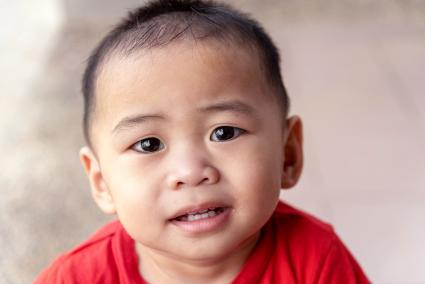 Blue Eyes Are Most Common in Caucasian Babies

Blue is the most common Caucasian eye color. About 8 percent of the world's population has blue eyes. If your baby is of Northern European or Baltic Sea descent, blue eyes are more likely.

Very Few Babies Will Wind up With Green Eyes

Green is the rarest eye color throughout the world, with less than 2 percent of the world's population having green eyes. Green eyes are nearly impossible to find in Asia, the Middle East, and even South America.

What Color Will Your Baby's Eyes Be?

Still curious about the possible eye color of your baby? The Baby Eye Color Calculator and Predictor can help you calculate the color of your baby's eyes. Of course, this isn't an absolute indicator, but it is fun to do, and once your baby is born, you can see if the predictor was correct. You could also try taking the quiz What Will My Babies Look Like? for a fun guess at his or her possible eye color. For more information or concerns regarding your baby's eye color, talk to your pediatrician.