A Lutheran baptism for infants is part of a long-held religious tradition that predates Lutheran Christianity itself. In many ways, the typical baptism in a Lutheran church will not differ much from one of other protestant denominations that practice paedobaptism (infant baptism). There will, however, be some defining elements that remain characteristically Lutheran during the ceremony.

Each year, many infants are subjected to a Lutheran baptism. Lutherans reside under the umbrella of paedobaptist denominations that consider infant baptism to be an essential rite into the Christian faith. Parents who have their children baptized as Lutherans typically do this because they themselves are devout Lutherans or Lutheranism is the traditional church of their ancestors.

The current age marks a great change in the attitude of many persons towards religious baptism ceremonies. These days, some parents will have their child baptized simply because it has been a tradition in their family lines. However, the practice of infant baptism has been tirelessly carried out by the Lutheran denomination and other Christian groups because it is considered to be a necessary step towards the deliverance of a child's soul. In the past, baptism has been practiced as a sacrament for redeeming the infant's soul from hell.

Baptism Is a Sacrament

If you are merely attending a baptism as a guest then you will note that the event is carried out with great reverence. Hence, there is a certain amount of protocol involved in this Lutheran ritual; protocol which is common to most baptism ceremonies.

What Happens at a Lutheran Baptism

The baptism typically takes place after the sermon. During the baptismal rite, the parents and sponsors will be asked to stand before the congregation with their infant. They will then proceed to the baptismal font with the pastor. When it is time to perform the baptism with water, typically one of the parents will hold the infant up to the baptismal font as the pastor sprinkles water on the child's forehead. The pastor will then make the sign of the cross on the infant's forehead as he states God's promise. A small candle lit from the paschal candle will then be presented to the parents or sponsors. The newly baptized child will be welcomed by the congregation. The baptismal party will return to their seats for the remainder of the service.

The key characteristic of a Lutheran baptism is that the ritual is carried out by a Lutheran pastor within a Lutheran church. An infant undergoing a baptism in the Lutheran faith will not be immersed in a pool of water. Rather, the sprinkling method has been considered sufficient by the Lutheran laity.

Which Babies Can Be Baptized in the Lutheran Church? 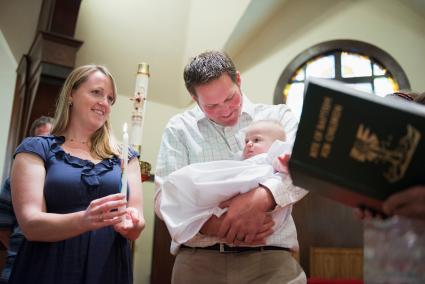 The details of setting up such an event may differ throughout Lutheran churches, despite the fact that they are all ensconced within the same denomination. Some Lutheran pastors may require that you be an attending member of the church before your infant can be sanctified through baptism. However, if you are not a regular attendee of Lutheran services, but still desire your child to receive baptism, some Lutheran pastors may be willing to accommodate such needs. If the latter situation represents your case, you will need to call a number of Lutheran churches in your area and meet with pastors to discuss the requirements.

Be prepared that many if not most of these churches will require that at least one of the parents has been baptized as an infant into the Lutheran faith. Although some churches may be more liberal regarding their baptism policies, the vast majority will examine their parishioners' beliefs to rule out mere whimsy.

The baptism etiquette during a Lutheran christening is similar to most Orthodox and Protestant baptisms.

If You Are Invited to a Lutheran Baptism

Naturally, you will not be attending such an event if you have not received an invitation or at least a very convincing plea from the parents of the infant. Since baptisms are events generally reserved for close family and friends, it is very inappropriate to bring unannounced guests or show up unannounced yourself.

Gifts for a Lutheran Baptism

Gift giving is not mandatory, but it is always an elegant and thoughtful gesture to bring the infant something worthy of this memorable occasion. Following a Lutheran baptism, there will typically be a reception held by the parents or a relative of the christened infant. Guests should attend unless they have a prior understanding with the hosts.

Baptism Is a Sacred Moment in a Baby's Life

Since baptisms have long been considered sacred events, it is actually a great honor if you have received an invitation to a Lutheran baptism as it means that you have been invited to witness what is considered a profession of faith and a salvific covenant. This is very meaningful to the family involved, and it shows that you are thought to be a close and valuable friend who is an important figure in their child's life.

Comments
© 2006-2021 LoveToKnow, Corp., except where otherwise noted. All Rights Reserved.
What Happens at a Lutheran Baptism?