Premature birth success stories are more common than you may realize. It's easy to focus on the worst when your child makes an unexpected arrival. However, there are many reasons to be optomistic and enjoy your time as a new parent.

Below are two heartfelt premature birth success stories that two strong moms were willing to share. Enjoy these beautiful stories.

Kim learned she had complications during her pregnancy on Valentine's Day in 2002. Excited for her doctor's appointment to learn the gender of her child, it soon changed to worry. Kim's blood pressure was too high and she was sent to Labor and Delivery to meet with a High Risk Labor and Delivery doctor.

Four weeks later, at 28 weeks gestation, her son was delivered weighing 1 pound 14 ounces and only 12 inches long. He had lots of trouble breathing and struggled a lot those first few hours. His parents named him David to help him prepare for his upcoming fight against Goliath.

David had many complications, including he was very sensitive to touch and had a heart defect the doctors had to repair. He struggled with breathing and was on the ventilator, which he did not enjoy. It was a common occurrence for David to pull the ventilator from his mouth.

David grew but caught numerous infections in the NICU. He was constantly placed in Isolation and required everyone that worked with him to wear gowns and gloves. He struggled with eating and eventually received a feeding tube.

After 4 months and 6 surgeries, David went home to a lot of therapy. 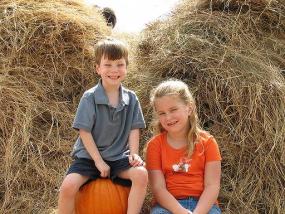 Today David is doing great! Pictured with his sister

Kim shares some of the emotions she went through. "It took four years of therapy to get David to accept food by mouth; and it's priceless now to see him eat! We reflect back to seeing him take his first step the day before his second birthday. It was an answer to our prayers as we wondered if he would need a walker or need additional assistance; just a day shy of the appointment to have additional testing on his legs and muscles.

It's a long journey but one that was worth every moment. We are blessed now with David being a fun loving 5 year old! He runs and plays and enjoys life to the fullest. We do have some reminders; as we see his surgical scars; or are reminded of his hearing loss or as we have to remember that it sometimes takes David a little longer to learn new task at school. But there's no stopping this precious boy in becoming anything his heart desires."

Barb had a miscarriage in 1998, and was diagnosed with an incompetent cervix. Her cervix was stitched shut until she was ready to deliver. When she got pregnant, everything preceded normal, with no complications.

The hospital they were at did not have a neonatal unit, so Barb was transferred to another hospital 40 minutes away. At the new hospital, the OB/GYN on duty stressed that he wanted to prolong delivery as long as possible for the benefit of the baby. He was concerned about how low the amniotic fluid was and the baby's activity had decreased significantly. So they waited.

It wasn't until Sunday afternoon when they could tell baby was under duress, and labor was started.

"I can still remember the nurse placing our little boy on the table with me, all swaddled up in a receiving blanket," said Barb. "I reached out and touched his tiny lips and said "My little trooper!". It was a very brief meeting, as he was soon taken to the Neonatal Unit. Our son weighed 4 pounds 14-1/2 Oz and was 18 inches long."

Their son was 8 weeks premature, but doing very well. He had jaundice and naturally needed to spend some time in an incubator. His lungs were adequately developed and he was breathing on his own. Unfortunately, they soon determined he had sleep apnea, which required constant monitoring when he slept for the next six months.

Barb was able to hold him the next day and he only spent 17 days in the NICU. However, breast feeding was not easy, so she pumped breast milk until he was able to catch on.

His pediatrician watched him for several months while he hit many growth milestones.

Barb said, "One thing he told us, which we will never forget, is that a healthy preemie will more than make up for lost time and when they are hungry we will know. Breastfeeding continued for the first 6 weeks, but then we switched to formula. Our son had difficulty with regular formula and projectile vomiting, so he had to be switched to soy formula for a while. However, once he started eating and switched to regular milk, his growth became phenomenal, eventually scoring in upper percentiles for his height and weight. Today, we boast a 6 Ft. 18 year old, who will always be referred to as "Our Little Trooper"."

Children who are premature may have complications, like food allergies, slower growth rate, or delays, but many preemie babies grow up to be healthy and strong.

If a friend of yours is going through a premature birth, you can help by giving lots of love and support. Some great gift ideas include a preemie quilt or gift basket.